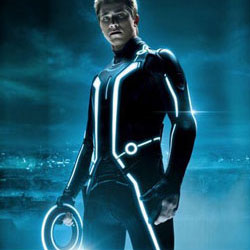 One very cool halloween costume is the Tron Costume.  Tron was originally a movie from the 1980s that also became a very popular 80s video game.  Both the Tron video game and the movie had a resurgence with  the 2010 film, Tron: Legacy – a movie about a software engineer stuck in “the Grid” a virtual reality world.  The engineer’s son Sam ventures into the grid finds him, and attempts to rescue him.  The movie is very popular with sci-fi lovers who have played the classic 80s video game and get to see it come to life again on the big screen.

The best part, bar none of the whole Tron series is the Tron outfit.  It is easily recognizable and undeniably cool.

Tron Legacy Costume
The Tron costume consists of a skin-tight black one-piece outfit, highlighted with glowing white lines along the major lines of the body. In the dark, the lines glow, in the daytime, they stand out very strongly against the dark black of the suit. The lines can come in white, or any other neon color that will glows in the dark. In the movie, Sam wears a costume like this. For women who want to dress up in this outfit, main female in the movie is Quorra – the Quorra costume looks just like Sam’s costume. Just add a short black-haired bob wig to complete the look! 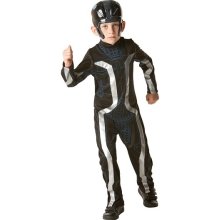 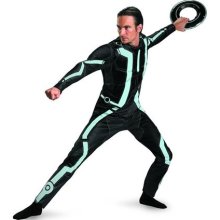 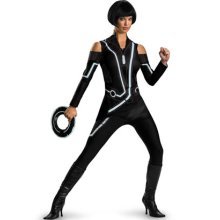 Identity Disc
One accessory that you will need for this halloween costume is the “Identity Disc”. The disc is a large round circular object (much like a frisbee with the middle cut out). Running around the edges are the glowing Tron lines. Carry it around as part of your outfit! 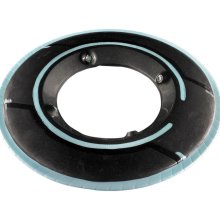 White Tron Costume
Yes, there is also a white version of this costume.  The men’s version is very easy to make yourself – just wear all white, including white gloves and white boots and add a white motorcycle helmet! 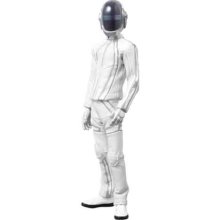 How to make your own Homemade Tron Costume
If you want to make the Tron costume yourself at home, you can do it pretty easily.
1. You’ll need a black bodysuit. Skin tight is better – yes, for both men and women.
2. Cut out white stripes from construction paper – or other white fabric if you have it and stick it onto the front of your all-black bodysuit.
3. If you really want to jazz up your outfit, you can buy LED string lights from the store that run on a battery pack and put them in your costume! If you’re doing this step, when you put on the white stripes in Step #2, just be sure to leave a little pouch along the white stripe (in other words, only glue the edges of the white) so that you can run the cord through. 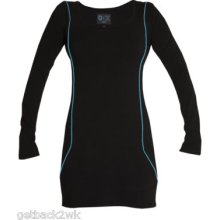 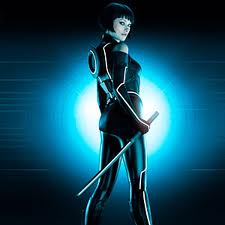