Do you want to be fant-cat-stick for hallowen? What about a Puss in Boots costume!? Puss N Boots was a heroic cat from the movie Shrek – he was played by actor Antonio Banderas. Although Puss the cat was small, he was very skilled with the sword and a great fighter often getting the better of his enemies! But before Puss N Boots was in Shrek, he was a in a fairy tale! It was actually a French fairy tale called Puss In Boots about a very tricky cat (very similar to the Shrek version). The fairy tale was originally published in 1697!

So what do you need to make this halloween costume?

1. Cat Fur – The first thing you need to do is make yourself into a Cat – Puss in Boots is after all a cat!! You will need fur all over your body – preferably a light brown color if you’re being the “shrek” version of the character.  A brown bodysuit will work just fine!  Be sure that your chest is a slightly lighter color!

2. Sword – The main accessory this brave fairy tale cat has is a sword. Puss carries around the sword as he often needs it for challenges he finds along the way. Remember, he is an expert sword fighter, so don’t be afraid to pull out your sword when you’re dressed up! On Guard!

3. Cavalier Hat – Puss In Boots wore a type of hat known as a cavalier hat. The cavalier hat is a wide brimmed hat made of felt with one side pinned up. Sticking out of the side is a long ostrich feather. The kind of hat was popular during the 17th century. 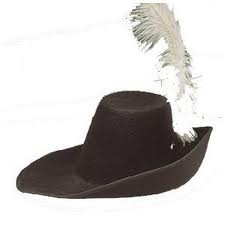 4. Short Black Cape, Belt, and tall boots – just a short black cape hanging off your shoulders, a belt in which you can put your sword, and tall boots are the only other pieces of clothing you will need!

Now that you have your four costume pieces, put them all together, and you will become puss in boots for halloween! 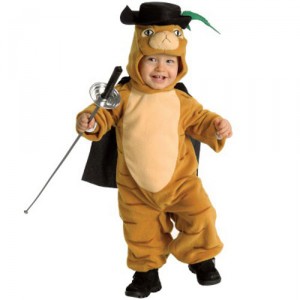 What about a Puss In Boots Adult Halloween Costume?
Your best bet if you want an adult Puss in Boots costume is to buy the separate pieces and make it yourself. Have some fun finding the pieces individually! The complete head to toe pre-made costumes (bodysuits) are typically going to be kids costumes.

Can my cat be Puss in Boots for Halloween?
Yes, she can. And it has to be one of the best cat halloween costumes out there! 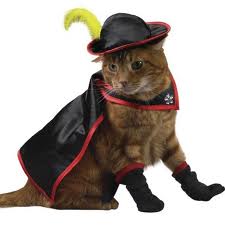