The priest movie costume is a very easy to make last minute costume idea and it is also very very cool looking!! Priest was a 2011 movie starring Paul Bettany as a “Priest” who is a professional vampire killer / warrior.

Cross Face Makeup
The most important part of the priest movie costume is the face makeup. In the movie, all the vampire killers – aka priests wore a cross “tattooed” on their foreheads. You can get the same effect with just a little bit of dark red colored or brown colored face paint. Study the pictures of Bettany’s version of the priest so you have an idea of what it should look like. 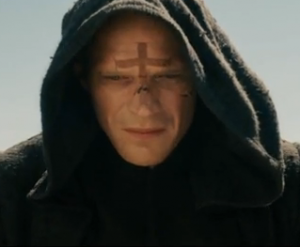 Hooded Cape
The next thing you will need is a long black hooded cape. This is a staple of the priest movie costume. If you don’t have a long black cape, you can always make one out of some black fabric. Failing that the costume works just fine without a cape too. If you do have the cape however, it adds great effect to the costume. Where the hood up over your head and do alot of glowering!

Priest Costume
Finally, under the cape (if you have one) you should be wearing all black, including black boots. Remember, this priest costume is a “gothic priest costume” or one that you would find in a time period more like the middle ages, so it should not be really preppy looking.  Long black robes cinched at the waist with a black belt work great.  Don’t forget the priest collar – but for this costume you do not need the white part!!

Fingerless Gloves
In his vampire fighting sequences, priest always wears fingerless gloves! You can buy or make some pretty cheap.

Accessorize with Vampire Fighting Kit
Finally, don’t forget to accessorize your costume with good vampire fighting tools including a rosary with a cross, a large black bible, and a silver dagger worn around your waist. Yes you’re a priest, but you’re a priest who fights vampires!! Don’t forget that!! Finally, if you want to make it look like you just came out of a vampire battle, you can add some fake blood and scratches to your face. Finish it off with carrying the head of a dead vampire and you’re done!! 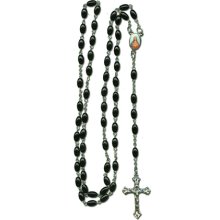