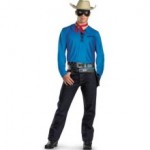 Who doesn’t want to be a masked hero!?  In 2013 the movie the Lone Ranger will be coming out with Johnny Depp playing Tonto and Armie Hammer playing the starring role – they’re sure to bring the Lone Ranger and the Wild West back into the Halloween scene in a big way – get a jump start on the trend by dressing up as the Lone Ranger this October!

Here’s what you need:

The Lone Ranger is a Texas Ranger from the frontier days in the Old West.  He is a “good guy” in every sense of the word, fighting crime and bringing justice to the wilderness of the frontier. He has two main signature pieces that you will need if you want to dress up in a Lone Ranger costume – the first of which is a western hat. The Lone Ranger hat is similar to a cowboy hat. 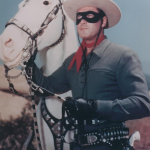 For your costume and purposes, be sure that your hat is white as that is the color the Lone Ranger always wears – it should also have at least a 4 inch brim, low sides, with a slight pencil roll around the brim.  In the TV Series, there was a matching ribbon that encircles the base of the hat.  Take a look at the pictures to get an idea – in the TV series, his hat was made of felt! 🙂

Besides the hat, the other iconic piece of costume that the Lone Ranger is never – never ever – seen without is his mask.  The mask just covers the eyes and is black, although the actor that portrayed the original Texas Ranger in the TV Series says because the show was aired in black and white his original mask was actually purple!  For your purposes be sure yours is black – you can pick up a  black felt hat for a few dollars at any craft or halloween store.

In most traditional representations of this Texas Ranger, you will find him wearing a red hankerchief knotted at an angle around his neck.  This is a simple costume accessory that can be picked up pretty cheaply at Kmart or Walmart!

3. Rest of the costume – Classic vs. Modernized! 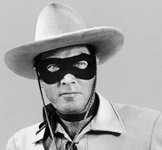 1950s version of the Lone Ranger

2013 version of the Lone Ranger

The rest of the costume really depends on what generation of Lone Ranger you are wanting to portray – if you want to be the classic from the TV series, then you will want blue pants, and a blue shirt. Don’t forget to add a holster around your waste, and of course finish the costume off with a pair of leather gloves!  If you want, you can modernize your Lone Ranger costume by dressing up as the version that Armie Hammer portrays in the 2013 movie! His version sports a black coat with lapel and a Texas Ranger pin on the front left breast pocket. 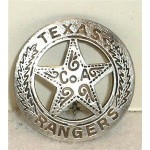 He also wears a white shirt underneath – gone are the blues of yesteryear!

You can easily turn this costume into a women’s costume by just adding a skirt and cowboy boots instad of pants – female Texas Ranger ot the rescue!!