Instead of being just a panda for halloween, why not try a Kung Fu Panda Costume?  Kung Fu Panda is probably the most famous movie panda around.  This panda is based on a 2008 animated movie starring Jack Black as Po the Kung Fu Panda.  In May of 2011, the pudgy panda returned in Kung Fu Panda 2!

The kids version of the halloween costume can be found by doing a quick search on yahoo shopping.  Most of the halloween costumes will have the panda head sitting on top of the kids head.  It’s also a full-bodied costume which is a great choice for cold halloween nights. Another nice part of this outfit choice is that it is not as boring as a plain panda costume and will appeal to young kids that are starting to like martial arts – in this costume they can do those high kicks or karate chops to their hearts content and it just adds to the costume! 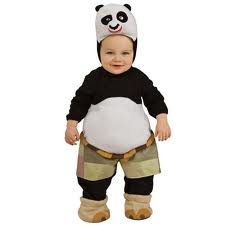 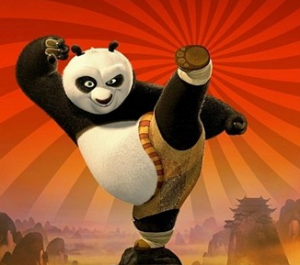 Halloween Kung Fu Panda for Adults
This outfit also comes in an adult version – the adult version that you can purchase however is much more of a “mascot” costume choice. It is a totally full-bodied outfit that covers the head completely with just holes for the eyes to look out. Actually it could be quite terrifying if you showed up to a halloween party in one of these! 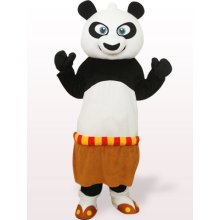 If you don’t want to purchase the outfit, you can try a do-it-yourself homemade kung fu panda costume. It’s not too difficult and with some creativity it can look pretty good!

Here’s how to do a homemade Kung Fu Panda costume:

1. Pandas are essentially black, so you’ll need black sweats – both the bottom and the top. This will be the base layer. Sweats are good because they are baggy enough to be stuffed to add the extra “panda pudge” that you will need to look like a true panda. If you don’t have sweats however use whatever black clothing that you have!

3. You’ll need Kung Fu Panda’s clothing! All you need for this are a pair of brown shorts and a hellow and red belt.

4. Put on your sweats and stuff the insides with stuffing – you can buy stuffing pretty cheaply in walmart. If you don’t want to buy stuffing, use what you have! You can stuff with other clothing or fabric or even newspapers if you need to. You’re going to need to stuff your chest, and arms to give you a pudgy panda look!

5. Put on your shorts and belt over your stuffed sweats!

6. The panda face = you’ll need either to get a panda mask – you can make one very easily with some cardboard or even purchase one at a party supply store. Alternatively, you can get some white and black face paint from the store and paint your face white. Add a ring of black around your eyes and you are done!!

7.  Do some high kicks, karate chops, and you’re a Kung Fu Panda!