A great halloween costume for you to choose this halloween is the Jesse James Costume! Jesse James was an American outlaw from the Wild West that lived in the mid to late 1800s. He is very well-known and everyone has a “cowboy” or “wild outlaw” image that comes to mind when you hear the famous name. If you’re wanting to be an “outlaw” from the “wild west” or even a “bank robber” this is the halloween costume for you!

Let’s take a look at pictures of clothing you’ll need to complete your Wild West costume… notice on the picture of the real Jesse James to the right the basic pieces you’ll need – a vest, a holster and gun, a cowboy hat, and a tie…!

The classic Jesse James costume consists of an outfit that is all one color – black slacks, black vest, and black overcoat. Partner this clothing with a black cowboy hat and a holster and gun. You can study Brad Pitt in the movie Assassination of Jesse James to get an idea of what the style was. Jesse James did not wear a traditional tie, but he did have one looped in a loose bow tie…or not worn at all…

There are other versions of the Jesse James Outlaw costume that you can take and you’ll still easily be recognized on halloween. You can do a traditional “cowboy” style with jeans, a red handkerchief around the neck (instead of a tie) and a red or black leather vest. You’ll still need a holster and gun. A long leather overcoat is always a nice touch but not a necessary piece of clothing. Finish it off with some cowboy boots!

Don’t forget to top your outfit off with an old cowboy hat – the brim should be nicely shaped and worn in. A dark color is best. 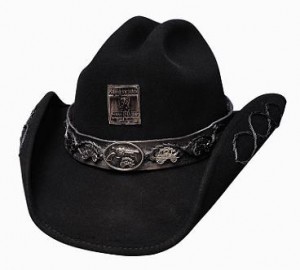