If you’re looking for a really fun halloween costume, you might want to check out the Edward Scissorhands Costume!  This is also a great costume for anyone wanting to dress up as one of Johnny Depp’s movie characters!  Edward Scissorhands was a movie from 1990 that starred Johnny Depp as Edward.  It was a romance about Edward (a man with scissor for hands).

Scissorshands
In order to be Edward Scissorhands for halloween, the most important thing that you will need are the Scissors to go on your hands!! The contraption can be purchased on line and slip onto your hands like gloves – they will instantly identify you as this movie character!! 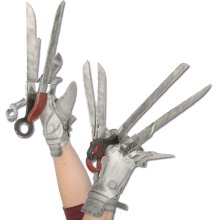 Edward’s Hair / Wig
The next part of the costume that you will need to make sure you get right is Edward’s hair. Edward was a very odd character, and his hair reflects that. It should be long and dark colored and a bit messy, sticking up in different places. Kind of like you just woke uP! You can either buy a wig, or if you have long dark hair, use a paste or gel to get your hair in disarray.

The rest of the Costume
The rest of the costume should be black. It should have belts and buckles. Black leather, and tall black boots. Take a look at pictures from the movie to get the idea in order to put something great together if you don’t want to purchase an outfit pre-made! If you’re a girl, don’t worry – the outfit can be easily customized by just wearing a black leather skirt instead of black pants! Very cute look! 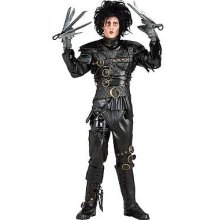 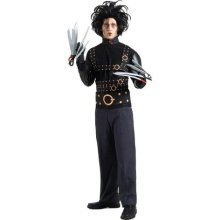