This halloween season, one of the top costumes is without a doubt going to be the Chris Kyle Costume.  Not only is this a great costume to dress up as since he’s considered an American Hero, but it is also a fairly simple costume to make on a DIY basis! If you know anyone (friends or family) that has been in the military, you practically have the costume made already!  You’ll probably want to get your costume pieces ready however, as due to the huge success of the movie American Sniper, you might have competition for the best accessories!

For those of you not overly familiar with who Chris Kyel was, he was a United State Navy Seal sniper – said to be the deadliest sniper in U.S. military history.  The movie American Sniper which was released in 2014, was made based on his life. (Incidentally, the movie was actually based on a memoir he wrote of the same name).  He died in 2013 on a shooting range, when a veteran he was with purposely shot him.

Costume accessories you’ll need to be the DIY American Sniper

1.  A baseball cap – In photo after photo you see of Chris Kyle, you’ll notice that one thing that he loves to wear is a baseball cap.  When he’s on the shooting range, he sometimes will turn it around backwards in order to get better visuals.  Day to day he’ll wear it normally.  The typical color of choice you’ll see him wear – and the one that you should get for your costume – is a tan / light brown cap. Another good choice is camo colored.  To complete the look, add a pair of sunglasses on top of the cap!

2.  Alot of facial hair – If you’re a guy, you’ll want to do your best to grow out your beard, as Chris Kyle most typically was scene with a short bear covering most of his chin and upper lip.

3.  Camo – The rest of your Chris Kyle costume should be military wear – this is where you’ll want to call in the help of friends and family to see what they have in their closets that 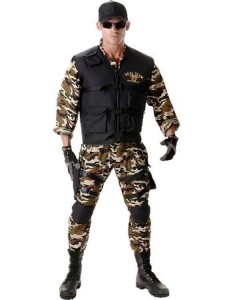 might fit you that you can wear.  Preferably, you’ll want to dress in camo shirt and pants.  You can add a brown or black vest on top to help complete the look.  If you don’t have any friends that can lend you the shirt and pant camo to wear, you can always check in outdoor outfitter stores like Outdoor World or Bass Pro Shops, where you’ll find a large selection of camo choices that will work not only for your costume but also to wear on a day-to-day basis! 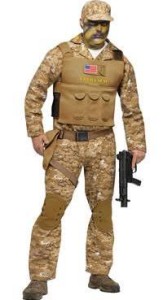 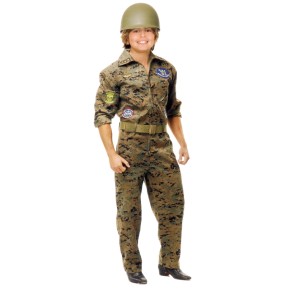