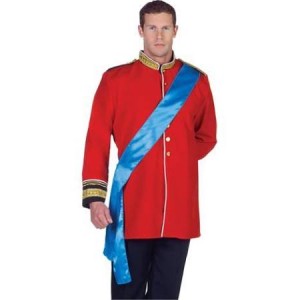 The best costume of Prince William is the one that showcases his regal attire….and the image that most people are likely to recognize is that of Prince William at his wedding!  Luckily, the costume is pretty simple to put together. 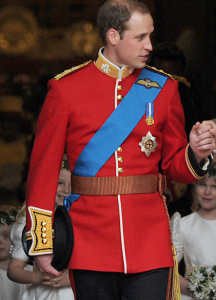 At his wedding, Prince William wore the full uniform of the Irish Guards mounted officer in Guard of Honor Order.   The tunic was a bright red (scarlet) color with distinctive buttons holding the coat closed.  The tunic also features a gold collar and gold wrist guards, as well as  a gold and crimson colored sash.  There were gold sword slings as well on the uniform, but no sword.  One top of the tunic, and an essential part that you’ll need to complete your costume, is a blue sash going from one shoulder down to the hip – which represents the Order of the Garder.  Finish your costume off with some of the additional ornaments Prince William tacked onto his tunic, such as a pin resembling the Royal Air Force Wings.  Check out the picture of Prince William at his wedding to get a better idea of what your costume should look like!

Keep your pans simple – simple black slacks with a red stripe down the side will do (you can accomplish the red stripe on your costume pretty easily with some red-colored duck tape available at most hobby sops!

If you want to accessorize your Prince William costume even further, you can add a hat! The prince wore a black captains cap.

If you don’t really want to get dressed up in the full Prince William costume, there is another option! You can buy pretty inexpensively cardboard cut-outs of Prince William’s face!  Just hold it up in front of your own face and – whalllaa – you have an instant Prince William Costume!